Where Does Bitcoin Come From? Bitcoin's Birth Story

In order to truly answer the question “where does bitcoin come from” it helps to start the story way back in the 1990s.

The nineties was the decade of internet mass adoption. In the span of ten years, millions of people went from not being internet active at all, to signing up for email, creating blogs, and connecting with other internet users all over the world. The decade began with siloed, proprietary web portals, like American Online and CompuServe, and ended with the launch of what would become massive platforms like Google and Yahoo.

As people started using the web to create content and connect with others, businesses also started moving online to connect with more customers. Early services like Amazon and Ebay signaled the arrival of the commercial web.

While new modes of communicating, interacting, and even social etiquette were getting hashed out, it was pretty clear early on that one crucial piece of the puzzle was missing. Even with new tools and products like email and search, or blogs and book buying, the internet lacked an easy way to send and receive money.

A flurry of startups —  companies like PayPal —  launched to fill this new need. But, in a lot of ways, these companies were just mapping legacy bank and credit card technology to the new frontier of the internet. Assuming you already had access to a bank account or credit card, legacy payment technology like banks and payment processors worked fine on the internet. But they were expensive to use (especially for small transactions) and have disadvantages for small businesses like chargebacks and long settlement times.

In a lot of ways, using analog payment technologies in the emerging digital space was like trying to pay for things with gold coins in a time of credit cards. Something had to change. There had to be a way to create an internet-native way of sending and receiving value that was not controlled by any centralized institution like a central bank or national government. The internet represented the freedom of information and freedom of speech. It also meant that it was time for financial freedom.

Digital cash and the foundation of bitcoin

Recognizing the need for some kind of internet-native form of currency, early pioneering projects included DigiCash (1989), Hashcash (1997), and B-money (1998) all of which began building new ways to think about the potential of digital money. There were other important digital currency projects during this time too, and they all approached the issue of sending and receiving currency over the internet in very different ways.

The biggest issue with early digital currency projects was, at the time, a very challenging computer science problem. If you have ever taken a screenshot or copy and pasted something while using the web, then you can appreciate one of the fundamental challenges with internet-based money: How do you simultaneously have something that is easily shared between two people and also have some way of verifying that the underlying asset that is shared is unique and not copied and pasted millions of times already. This was known as the double-spend problem, and bitcoin solved it.

In order to build a system where people exchanging digital currency could verify transaction details and be confident that they weren’t playing into some kind of scam —  all without the need of a centralized party such as a payment processor, bank, or credit card company —  early digital cash projects turned to encryption and cryptography.

From these early underpinnings of using cryptography to secure and verify transactions came a lot of the lessons that would eventually be used to build bitcoin (it’s also why people started calling these new forms of digital currency, cryptocurrencies).

At the same time, it should be noted, that researchers at places like Harvard, MIT, and UC Berkeley were also developing new technologies, like proof-of-work (which was used as a foundation of HashCash and eventually bitcoin, but originally conceived as a way to deal with email spam). In fact, some of the foundations of bitcoin go back even further to the late 1970s and early 1980s, and the development of public-key cryptography.

The main takeaway here is that bitcoin is a technology that is based on the evolution of internet research and other commercialized projects. In many ways, bitcoin has been so successful because it drew on the most established work and on the brightest ideas that came before it —  and it arrived just in time.

Satoshi Nakamoto and the bitcoin whitepaper

OK, so now we get to the part of the story where we can answer “where does bitcoin come from?” 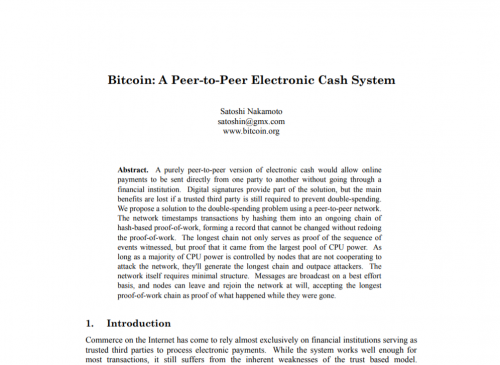 At 2:10 pm EST on October 31, 2008, Satoshi Nakamoto published the bitcoin whitepaper officially titled, Bitcoin: A peer-to-peer electronic cash system. There are a few things about the publication of the paper that are unique and while unknown at the time, have also led to bitcoin’s success.

The big mystery is that no one knows the identity of Satoshi Nakamoto. Over the past decade, especially as the value of bitcoin has continued to grow exponentially, there has been a ton of speculation, digital forensics, and crazy guesses, though the person (or group of people) responsible for the creation of bitcoin still remains a mystery.

The second interesting thing about the publication of the bitcoin paper is that it arrived in the world with little fanfare or anything in the way of a marketing or PR push. Instead, Satoshi Nakamoto sent the paper to a cryptography email list. This list was mainly made up of cypherpunks, or internet activists that believe the internet can only really be free if it is built with privacy and personal security principles in mind.

The bitcoin whitepaper was not an immediate success. In fact, Satoshi Nakamoto had to resend it to the list a second time a week later. Some people wrote back and had questions about how the network would scale, or what would happen if the network were attacked or compromised. Satoshi answered all of the questions outlining the plan for a distributed network that would slowly scale, and as it scaled it would only become stronger and more valuable.

Overtime, thanks largely to hindsight, it became clear that bitcoin represented more than a secure digital ledger, it provided a means for people to confidently send, receive, and store value. It should be noted too, that bitcoin is an impressive combination of simplicity, utility, and security – a theme that is often left out of the mainstream conversation around bitcoin. By using game theory, mathematical-base depreciation, and incentivizing the upkeep and growth of the network through rewards, Satoshi built an entire economic system that is compatible with the depth and breadth of the internet.

Born out of a financial crisis

The actual bitcoin network launched in January 2009, in the aftermath of the 2008 financial crisis. As central banks around the world panicked and created billions in new money, bitcoin was given a timely shot at changing the way we think about money. Bitcoin became a direct opposition to the financial system which was failing global economies at the time. A decentralized ledger, maintained by no single government or authority, became quite appealing to those watching the centralized legacy systems around them fail.

At first, only a handful of users downloaded bitcoin nodes and bitcoin miners —  both of which are important pieces for validating transactions and building the blocks of transaction data (which is where the word blockchain comes from). But pretty soon, bitcoin stewardship became the responsibility of the community. Early contributors started adding to the open source code, making improvements, and fixing bugs. Others started sending and receiving bitcoin. One of the most well-known of these early bitcoin promoters was American computer scientist, Hal Finney. He ran the second bitcoin node after Satoshi, and wrote the following tweet, one that is now part of the bitcoin legend.

Soon after launching bitcoin, Satoshi disappeared, which has fueled intrigue and mystery, but it has also helped bitcoin remain decentralized. Over the next ten years, the ideas laid out about bitcoin’s growth, scaling, and adoption would be tested.

Today, there are more than 10,000 bitcoin nodes operating all over the world (the number fluctuates frequently, a current number can be found at bitnodes.io). Another positive metric is the number of wallets in existence. A bitcoin wallet provides a way to access bitcoin stored on the bitcoin blockchain. Over the last decade, the number of bitcoin wallets has grown steadily, with over 50 million at time of writing.

Lastly, in a little more than ten years, the somewhat obscure peer-to-peer payment system that was bitcoin has grown to become one of the world’s best performing financial assets of any kind. While there is no way to predict the future, the continued trend of global interest and adoption suggest that bitcoin will continue to grow.

Understanding where bitcoin comes from is important. But it’s also important to understand bitcoin’s full potential —  and where it is headed.

How To Use A Bitcoin ATM or Kiosk: A Beginner’s Guide For 2021 How did you first hear about bitcoin? Maybe you saw a story on

Whether you are feeling good about the recent bitcoin market gains, or just generally feeling the giving-back vibe of the holiday season — there are plenty of ways to donate bitcoin to great charities and nonprofit organizations.